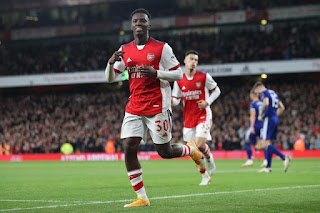 Former Leeds United loanee Eddie Nketiah has turned has turned down the offer of a new contract with Arsenal and Marcelo Bielsa’s side are considered favourites to snap up the striker.

Sky Sports News confirmed that the former England youth international, 22, had turned down a new deal with the North London club.

The decision is said to not be based on finances, but rather a desire to get more regular game time.

Nketiah, who scored three goals in 17 league appearances for Leeds during the 2019-20 Championship season, will be a free agent in the summer.

SkyBet consider United to be the striker’s most likely next destination, leading the market at 6/1.

West Ham (7/1), Newcastle United (10/1) and Norwich City (10/1) are all also in the betting with the January transfer window now only one month away.

Despite being favourites for his signature, a price of 6/1 does suggest that a return to Elland Road may not be entirely likely.

United are also not expected to prioritise signing a forward next month, with several options already available in that position.

Patrick Bamford will return from injury soon and Tyler Roberts impressed with his display up front against Crystal Palace.

Meanwhile, Rodrigo has threatened to hit form at times this season and Joe Gelhardt has been a breakout star and is showing huge promise.

Nketiah has made just two appearances for the Gunners this season, both in the EFL Cup, but scored in each match including against Leeds in Octobers 2-0 win at the Emirates Stadium.