Adam Forshaw on his fitness, his future and what Elland Road roar is doing for Leeds United = YEP 2/12/21 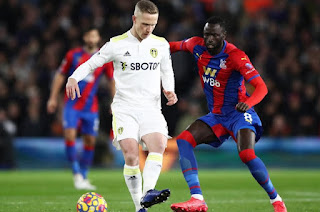 Adam Forshaw says the Elland Road roar is getting the best out of Leeds United ahead of another home game this weekend.

The Whites will host one of the midfielder's former clubs when Brentford pay a visit to LS11 on Sunday and Forshaw, fit again and restored to the starting XI after almost two years out through injury, can't wait to play.

The draw at Brighton and Tuesday night's home win over Crystal Palace allowed Forshaw to prove to everyone else what he already knew himself to be true.

"After the last two games I've felt brand new," he told BBC Leeds. "With them coming in quick succession people naturally will have thought it's an acid test for me and genuinely I feel really good, starting to feel sharp, having a freshness in my thinking and movement. I'm just loving it.

"I think it was probably more [to prove to] everyone else - I know how I recover in terms of my eating and trying to get as much sleep as I can. I know I do everything right. Once I got through the Leicester game through 90 minutes I knew to myself I was fine."

Although he admits there were times during his injury hell that left him worried for his future, Forshaw insists he always believed he would make it back onto the pitch. Now that he's playing again he's in no mood to dwell on the past and, with his contract up in the summer, in no real position to control the future. All he can focus on is each game.

"My wife and I have had a chat about it in the last few weeks and almost pinched ourselves. There were times I was worried, I won't lie, it was hard at the time but I don't want to dwell on it at all. It's behind me, it's in the past and I am looking forward and just loving what I'm doing again.

"I always believed, I would never ever have given up. I wouldn't have known what else to do. The feeling of knowing I was really back was probably as late as Leicester. Knowing I could complete a 90 minutes and feel good after it, ready to go again, was real relief.

"I'd love [to stay at Leeds]. My kids are in pre-school, we've loved it, I've never enjoyed living somewhere as much as I've enjoyed living here and I've had a torrid time on the pitch, so that say a lot about the people and the area and what I think of the place. I'm just enjoying playing again and see what the future holds.

"I hope [to stay], I don't know. It's not up to me. I just want to keep playing, stay in the team and help them climb up the table."

Every game in the Premier League is an acid test but Leeds go into a meeting with Brentford on the back of a memorable night at Elland Road, where they beat Crystal Palace with Raphinha's stoppage time penalty.

The atmosphere in the ground is something Forshaw hasn't found anywhere else and he says it's a factor when it comes to performances.

"Really looking forward to [Sunday], especially after the win on Tuesday," he said.

"It gives us a bit of momentum. I was speaking to Stu Dallas after the game and I don't hear a noise like that in any other stadium, genuinely. The way the fans were, it doesn't half drive us on. We were in the ice bath talking about it. I think it adds to our intensity, it's almost like you feel a push on your back. When we hear the noise you want to give that extra yard and it rallies you. I love it personally, I think it gets the best out of us.

"Taking away the occasion for me of it being a former team, I just think it's another chance for us to put another good performance in at home and kick on."