McDermott - Not a great day at the office 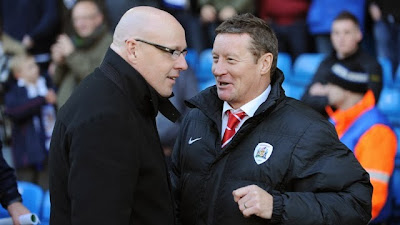 Leeds United boss Brian McDermott seemed happy with a point after a 0-0 draw with Barnsley in
their final home game before Christmas admitting, 'it wasn`t a great day at the office`.
Despite dropping points at home, as they failed to score at home for only the second time this season, Leeds climbed a place into fifth in the championship and McDermott preferred to reflect on the positives after the game.
Speaking on LUTV, McDermott said, "In the first half, thankfully that is 45 minutes of our life that we will never get back. In the second half, we huffed and puffed and we were better.
"I have seen games like that when you lose 1-0 and that was my biggest problem because I thought we could lose the game 1-0.
"Barnsley played well but we were too predictable in the second half but over 46 games we will get games like this.
"You have to keep a clean sheet to get something and today we have moved up a place, so I can`t be too disappointed because I saw the game and how it went.
"We will now move on and we will try to be better in the next game.
"It wasn`t a great day at the office but I will take the point, the clean sheet and moving up a place."
Leeds failed to break down a stubborn Barnsley defence who seemed buoyed by the arrival of new manager Danny Wilson and the visitors had their own chances to win the game.
Matt Smith, Ross McCormack and Danny Pugh all forced Jack Butland into good saves whilst at the other end; Marcus Tudgay wasted the visitor`s best chance when he fired wide when he was in behind the Leeds defence.
Leeds now move on to a busy festive period with three games in six days. First up is a tough looking trip to Blackpool before going on the road again to face Nottingham Forest, with both clubs still harbouring ambitions to make the play-offs this season.
Blackburn Rovers visit Elland Road on New Year`s Day with Leeds looking to gain quick revenge for the defeat at Ewood Park at the end of November, Leeds only defeat in their last eight games.