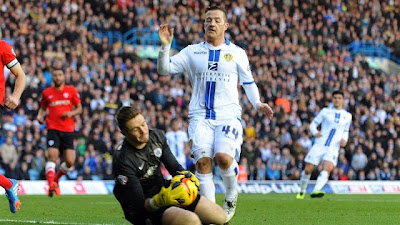 Yorkshire Evening Post 21/12/13
Danny Wilson is convinced rock bottom Barnsley can survive in the Sky Bet Championship after they chalked up only their second clean sheet of the season.
Wilson made an encouraging start to his second spell in charge of the Tykes, who restricted high-flying Leeds to a goalless draw in a combative Yorkshire derby watched by over 31,000 at Elland Road.
The performance was marred by an 84th-minute red card for striker Marcus Tudgay for a two-footed tackle on Leeds’ Lithuanian defender Marius Zaliukas, but Wilson was upbeat about his team’s display.
He said: “It was a very good performance. For large parts of the first half we played really well after our keeper had made a good save.
“We made some chances and if one of them had gone in it would have given us an even bigger incentive.
“We had to defend in great numbers, which is to be expected when you come to Leeds. Brian McDermott has put a good team together and there is no doubt in my mind that they will be right up there come the end of the season.
“We deserve a bit of credit for how we played with a really positive attitude. We didn’t come just to make up the numbers.
“The result and performance are bound to give us confidence for the task ahead and the quality is there to survive. They have shown they can defend and we have something to build on.”
Wilson said he would not be appealing against Tudgay’s straight red card.
“It looked a bad challenge but it wasn’t malicious,” he said. “He just can’t tackle and it looked worse than it was, but the referee was right on top of the incident and it looked as if Marcus went over the top,” he said.
Leeds manager Brian McDermott felt Tudgay deserved to be sent off.
He said: “It was a red card offence.
“It was not a good tackle. Danny will be disappointed when he sees the tackle again and so will the player who went over the ball.
“If Barnsley play like they did, they have a major chance of staying up, but with so many matches to play and so many twists and turns to come, no-one can make those calls.“
McDermott admitted Leeds had underperformed against their Yorkshire rivals.
He added: “The first half wasn’t good from our point of view. That’s 45 minutes of our lives we’ll never get back.
Matt Smith had a good chance to make it 1-0 but their keeper made a good save. We will take the result and move up one place to fifth.
“It was one of those days. We will all forget the game very quickly and move on to Blackpool on Boxing Day.”