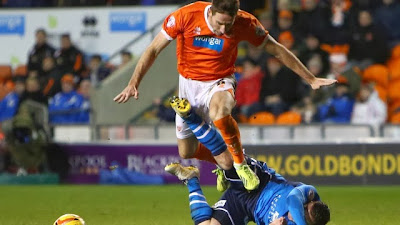 Yorkshire Post 26/12/13
Leeds boss Brian McDermott believes referee Scott Mathieson cost his side victory against Blackpool by failing to dismiss Seasiders’ defender Kirk Broadfoot earlier in their 1-1 draw at Bloomfield Road.
Broadfoot, who was eventually shown a straight red card in the final minute for a nasty challenge on Marius Zaliukas, hauled down Ross McCormack on the edge of the area when the striker was seemingly clean through on goal.
Referee Mathieson produced only a yellow card and Blackpool eventually held on for a point.
Midway through the first half, Lee Peltier had nodded Leeds in front but Tom Ince’s 65th-minute deflected strike ensured Blackpool ended a run of four straight defeats.
Leeds remain in the play-off places and unbeaten in five but McDermott is convinced Mathieson cost his side all three points. “The referee made an error when Ross McCormack ran through on goal,” said McDermott.
“Kirk Broadfoot brought him down and he’s going in on goal, he’s got the ball under control and the referee has made the wrong decision. He’s given him a yellow card but it had to be a sending off.
“It’s a massive moment in the match because he’s one-on-one with the goalkeeper and if he scores, which I’d back him to, then we probably go on to win the game.
“Marius (Zaliukas) has taken a nasty tackle for the red card towards the end but luckily he’s okay and he’s a brave boy because it was a bad challenge.
“Overall we’re happy, sometimes you go away from home and be solid and we’ve done that. We’ve kept the points ticking over away from home and we move on to Nottingham Forest.”
Blackpool came into the match on a run of two defeats from their last three at home in the Championship but they did miss several chances.
And assistant Alex Rae was full of praise for Ince while admitting the the Seasiders squad is set for a major shake-up in January.
“We told them to be patient and tried to switch the play plenty, which is where we got plenty of joy,” said Rae.