United went down to a single goal at Molineux but Kevin Blackwell's patched up side still put up a good fight against the Wolves. 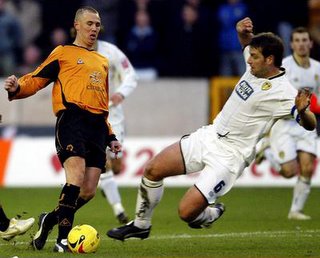 the side that lost at home to Cardiff, two of them were forced on him.
Striker Rob Hulse received a painkilling injection at the start of the week to help soften the impact of a hip injury he has been playing with, but even that was not enough to ease the pain and Leeds decided enough pressure had been put on the forward.
He was forced to miss the game and the indications now are that he will undergo an operation next week to find a final solution to the injury.
His place was taken by fit-again striker Richard Cresswell, just back from spending the past two and a half months out after rupturing a tendon in his knee. His only competitive action before this game since returning to fitness was 45 minutes for the reserves in midweek.
Elsewhere, there was another body returning from injury in the form of Shaun Derry. Derry was back ten days early from a hamstring injury and he took over from Sean Gregan in midfield. The final change was at the back where the absence of Gary Kelly through suspension and Frazer Richardson through injury forced Blackwell to go into the game without a specialist right-back. The job went to youngster Simon Walton, whose last foray in the position was in last season's nightmare against Sheffield United when Leeds were hammered 4-0 and he was substituted before half-time.

The Match
The home side had the first opportunity to take the lead after just five minutes.
Lescott fluffed his chance 12-yards out but Wolves were still able to test Sullivan when Lee Naylor seized onto the loose ball and got a shot off on target that Sullivan managed to tip away and Kilgallon shepharded away to safety.
Leeds missed their first chance to work the keeper two minutes later when Richard Cresswell was able to get a connection on a corner after he was picked out well inside the area.
There was more danger for United when South Korean hitman Seol sent in a low cross from the right and Leeds were fortunate that Wolves Romanian international striker Vio Ganea was unable to get a touch on the ball four yards out.
Leeds had a good ten minute spell just before the half hour mark when they rarely let Wolves get out of their own half, but still they were not able to create any real openings to lead to a goal.
The nearest they came was when Healy drove his cross away and Postma in the Wolves goal was just able to get a hand to the ball to take it away from the waiting Cresswell and Liam Miller.
Ten minutes before the break Leeds should have had the breakthrough as Matthew Kilgallon came close twice.
First the defender met Lewis's cross at the back post with a crashing header just four yards out but it hit the post and then Postma pulled off a great block before Healy tried to squeese the loose ball in but the keeper just managed to turn it behind.
From the corner the ball was driven across face of goal and Kilgallon was inches away from turning it in.
That was the catalyst the game needed to spring into life, and Wolves found themselves twice frustrated by the woodwork as they took their turn to enjoy a spell of pressure.
Huddlestone's rasping shot from the edge of the area hit the bar, Sullivan knocked it clear but only as far as Ganea and Sullivan again managed to get a slight touch to turn it onto the woodwork again.
There was little that Sullivan or the woodwork could do on 38 minutes when the home side did break the deadlock.
Naylor's cross found Seol and he mishit his shot inside the area but it fell nicely for Ganea who simply placed it past Sullivan froom six yards out.
Leeds went into the break a goal down and with a fight on their hands to avoid defeat. Neither side made a change at half-time and the onus was on Leeds to come out and try to rescue the game.
Ten minutes into the half and Ricketts was tripped by Miller two yards out from the penalty area and fortunately Darren Anderton was well wide with the free-kick.
On the hour Robbie Blake's free-kick found Healy on the left of the penalty area and the striker looked well placed for the shot but chose to try and chip the ball into the six yard box instead and the chance went begging.
Dan Harding then picked up his second yellow card of the season for a foul on Seol.
Wolves broke well on 62 minutes and only Butler throwing himself in the way of Ganea's shot prevented them from extending their lead.
Simon Walton was the next player to pick up 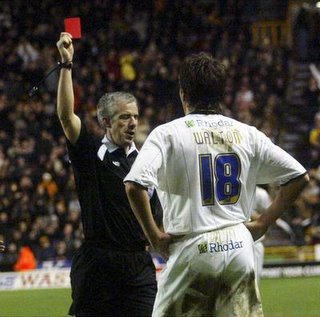 a booking with Wolves gradually turning up the pressure on Leeds as they chased a second goal to kill the game off.
Blackwell made his first change on 68 minutes, bringing a tired looking Richard Cresswell off and bringing Ian Moore on.
Dan Harding was tripped five yard short of the penalty area, giving Robbie Blake the chance to try his luck with the free-kick but it hit the wall and went behind for a corner which Leeds wasted.
Wolves made their first change with 12 minutes left, bringing on Colin Cameron for the goalscorer, Vio Ganea.
Leeds nearly caught Wolves out on 80 minutes when Lewis delivered a waist height cross from the left that the keeper was only able to punch clear - just beyond the reach of Robbie Blake.
United's task got considerably header when they were reduced to ten men after Simon Walton was sent off for two bookable offences, his last coming when he tried to block the run of Naylor.
It looked a harsh decision on the youngster who had fared reasonably well in the alien position of right-back. Kevin Blackwell's protests on the touchline had little effect on changing the referee's decision.
Naylor was then booked for taking the free-kick before he was given permission to do so.
Jonathan Douglas came on for Dan Harding with just five minutes remaining but Leeds had run out of ideas and the prospect of getting a point out of the game was remote.
Liam Miller picked up a booking in injury time - his fifth of the season - and now faces a one match ban. Time ran out for Leeds at the end and they were left to lick their wounds after another defeat - the first time they have lost two games back to back this season.