AS Ken Bates tucked into his birthday lunch surrounded by family and friends at Elland Road yesterday, he will have been able to reflect contentedly on the progress being made by Leeds United. A fourth consecutive league win, the first time Leeds have enjoyed such a rewarding run of results since the closing weeks of the 2000-01 season, 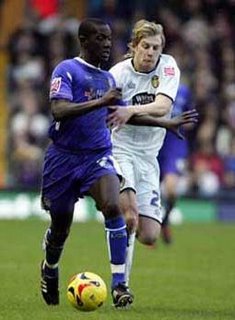 was enough to nudge United up to the highest position of Kevin Blackwell's reign.
There is a genuine air of optimism surrounding the club with the manner of the victory over an attack-minded Leicester side offering further proof that the growing confidence of supporters and players alike is not misplaced.
Blackwell's policy of recruting proven goal-scoring talent – he has spent more than £3.5m on his four frontline strikers – meant against the Foxes the United manager was able to adopt a formation he favoured for much of last season. Unlike last term, however, when it more resembled a 4-5-1 line-up with David Healy invariably marooned on the left just in front of the United full-back, this time around it is a much more fluent three-man attack with Healy and Robbie Blake either side of Rob Hulse.
This was never more apparent than during the closing stages when, despite Leicester having the ball in the home side's half, United's shape remained unaltered with the trio of strikers able to concentrate on causing problems for the visitors' defence.
Such an adventurous approach invariably gives the opposition more licence to attack, Neil Sullivan was the busier of the two goalkeepers in the first half when denying Elvis Hammond, Ryan Smith and Joey Gudjonsson. The former Scotland international was also fortunate when a header by Patrick McCarthy rebounded off the crossbar against the back of his head before bouncing behind to safety.
But the plus side of a three-man attack is the amount of chances it creates with Leeds striking the crossbar twice through Eddie Lewis and Hulse, and Blake thought he had won a first-half penalty when Patrik Gerrbrand appeared to handle. Hulse, who has not scored in nine games, twice went close as United poured forward and Liam Miller was unfortunate to see a 25-yard volley bounce just wide.
A three-man attack inevitably put pressure on the Leeds midfield and Leicester battled hard to utilise their one-man advantage. The trio of Eddie Lewis, Miller and Simon Walton refused to be over-run, though, with the on-loan Miller in particular using the ball intelligently.
Walton also impressed on his first start since April with a mature display from the 18-year-old ensuring Leicester were never truly able to utilise their superior numbers. The teenager made 30 Championship appearances for Leeds last season but has had to be patient this time around.
He said: "It has been frustrating with the wait, but the team have been doing well so that has made it extra hard. But I like to think I did grab the chance with both hands against Leicester. "I have had to mature in the past 18 months and I do feel I have learned a lot. I made wrong decisions with my passing last year at times, I realised it was an area I had to work on. My composure was in question along with my decision-making, but I feel I have improved.
"I am a kid playing first team football for Leeds so I have to just enjoy it. It is up to the manager because there are players coming back and it would be naive of me to think I will be straight in there.
"The momentum is building. I have watched a lot from the sidelines and I can see us getting better every week. We have to work to make sure it continues. We are third with a game in hand and that is a good position to be in with Christmas coming up. We can push on from here."
United's goals were both well-worked affairs with the opener on 41 minutes seeing Lewis back-heel a free-kick to provide Healy with a vital extra couple of yards to curl an exquisite shot round the defensive wall and into the corner of the net.It was another set-piece that helped create the decisive strike after Joey Gudjonsson had equalised from the penalty spot, Blake running over the ball to allow Lewis to flick a pass to the former Bradford striker. The defence, caught flat-footed by the unexpected pass, tried to close Blake down but, after skipping past two tackles, he drilled a low shot into the six-yard area where Matthew Kilgallon diverted the ball into the net. The Foxes defence appealed in vain for offside, defender McCarthy taking his protests too far with his berating of a linesman earning two yellow cards and ensuring the visitors finished the game with 10 men.
Despite a couple of late half-chances, Leicester were unable to deny United a fourth straight win to leave Bates able to celebrate his 74th birthday with the present he wanted more than most – another three points.
richard.sutcliffe@ypn.co.uk
Leeds United: Sullivan; Kelly, Butler, KIlgallon, Harding; Walton (Richardson 84), Miller, Lewis; Healy (Moore 89), Hulse, Blake (Pugh 89).
Leicester City: Douglas; Stearman, McCarthy, Gerrbrand, Maybury; Smith, Kisnorbo (De Vries 81), Gudjonsson, Sylla; Hume, Hammond (Dublin 87).
Referee: M Dean (Wirral).
Leeds man of the match: Miller.