Slowly but surely, the dark clouds that have encircled Elland Road for some time now, are 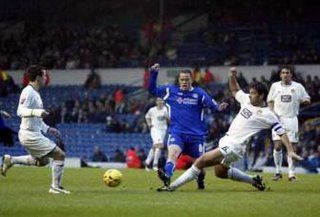 beginning to part. This victory over Leicester City - their fourth consecutive in the Championship - moves Leeds into third place and many supporters believe their latest ensemble have the ability to catch the distant top two.
"We know what the supporters expect and we're not content with reaching the play-offs,'' John Carver, the Leeds head coach, said. ''If we continue to show the character we did today, there's no reason why we can't push the leaders."
Before David Healy opened the scoring with a well-worked free-kick late in the first half, an Eddie Lewis shot that just went over was all Leeds had to show for their attacking efforts. In fact only the woodwork had prevented Paul Butler from heading past his own goalkeeper and giving Leicester a possible half-time advantage.
Craig Levein's team had obviously taken confidence from their victory over Sheffield United last weekend and not many teams come to Leeds and play the way the Foxes did in the first half. Leicester were finally rewarded in the 70th minute through Joey Gudjonsson's penalty. However, Matthew Kilgallon ensured Leeds' continued run of form when he diverted Robbie Blake's shot past Douglas. Valid claims for offside against the Leeds defender fell on deaf ears, much to the annoyance of Leicester centre-back Patrick McCarthy who was subsequently sent off by referee Mike Dean.