Skip to main content
- December 28, 2011
Telegraph 26/12/11
Derby County 1 Leeds United 0: match report
By Ian Edwards, at Pride Park
Simon Grayson has retained his dignity under increasing public pressure from Ken Bates in recent weeks. The Leeds United owner’s ultimatums about the need for promotion and the consequences of failure for his manager have 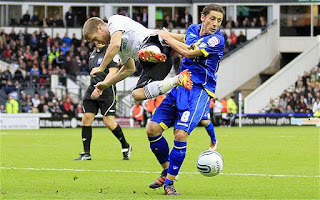 not been open to misinterpretation. The pressure on Grayson’s shoulders will have intensified following this latest disappointment.
Whether Grayson will remain in charge long enough to bring in the possible new additions to the squad he has identified and “discussed” with Bates remains uncertain. According to Grayson, Bates is “willing to invest” and improve the squad who have been inconsistent of late, but sources close to the club have reservations about whether Grayson will be trusted to spend whatever funds are available when the former Chelsea owner releases his grip on the purse strings.
“We are looking to bring in players and we have had meetings. Every chairman wants to push on and we know we need to be in the Premier League. We are still in a decent position and a couple of new players would help us push on,” said Grayson.
The fact his side had remained around the top six all season, despite a run of one win in their last six homes games, says more about the paucity of genuine talent in the Championship than it does about Leeds’s promotion credentials.
Jamie Ward’s third goal of the season provided some rare festive cheer for Derby, helping them to only their second Boxing Day victory in 13 years. It pushed Leeds out of the top six for the first time since the beginning of November and placed greater emphasis on Leeds’s New Year’s Eve local argument with Barnsley, before the home game with Burnley. Anything less than four points could end Grayson’s tenure and the whispers about a potential move to Elland Road for Chelsea coach Roberto Di Matteo will only intensify.
When asked if he expects patience from Bates, Grayson said: “He has given me three years, which is two years longer than most managers get, but there is always pressure for anyone managing Leeds United. The expectations are so high.”
On another day his side would have at least taken a share of the spoils, but excellent goalkeeping from Frank Fielding and Luciano Becchio’s inability to direct his header from six-yards on target late in the first half, prevented Leeds from taking anything from this game.
For Grayson it was the “right way” to lose. Both he and Bates would have preferred the wrong way to win, and the wait for a league victory over Derby now runs to seven years - much to the relief of Nigel Clough.
The Derby manager, who had to endure some distasteful chants about his late father Brian, was able to celebrate only a second victory in nine matches thanks to Ward’s perseverance. Ward was aided by Craig Bryson’s incisive pass which gave the midfielder the opportunity to force a save out of Andy Lonergan before he found the net with the rebound.
Derby’s victory would have been more comprehensive if Nathan Tyson had marked his first start for the club since signing from Nottingham Forest in the summer with a debut goal. The striker, clearly lacking match sharpness, fired his close-range effort straight at Lonergan.
Clough was just happy to have Tyson, who has been battling a groin injury, back on the field of play, along with Shaun Barker. The Derby captain was back to his imperious best yesterday having missed the majority of the season so far after knee surgery.
“That is the side we wanted to put out at the start of the season and it has taken until Boxing Day. It is hard when you lose key players for a long period and it is no surprise we look better when they are back,” said Clough.