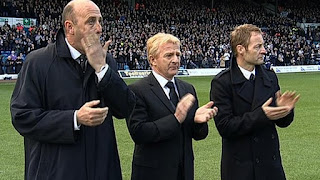 Strachan and David Batty laid a wreath before kick-off.
Snodgrass curled in a 25-yard free-kick and headed in a Lloyd Sam cross as United ran out comfortable winners.
Darius Henderson came closest for the Lions, but his header was well saved.
A video montage of Speed's goals preceded the game and Leeds fans chanted his name for 11 minutes, from the 11th minute, in recognition of his shirt number as they had done during their midweek 4-0 win at Nottingham Forest.
Gary Speed was an absolute first-class person and an absolute privilege to work with. He was someone dedicated to making the best of what he had. I tried to sign him when I came to Leeds United, but Bolton nicked him.
Former Leeds boss Kevin Blackwell on BBC Radio 5 live sports extra
On the pitch though, Leeds' inconsistent start to the season looked set to continue as they struggled to break down the visitors in the opening half.
Their best chance was fashioned by Snodgrass, whose clipped cross-shot looped over visiting goalkeeper Steve Mildenhall but was easily headed off the line.
And United had their keeper Alex McCarthy to thank for keeping the scores level at half-time when he dived to his right to push Henderson's downward header round his post.
Millwall started the second half brightly, with Scott Barron's driven 20-yard free-kick testing McCarthy.
However, Leeds, who lost midfielders Jonny Howson and Michael Brown to leg injuries before the break, took hold of the game with substitutes Sam and Andy Keogh looking lively going forward.
Keogh headed an effort straight at Mildenhall, while Sam volleyed a difficult chance into the crowd and Snodgrass drilled a 25-yard effort a couple of feet wide.
Winger Snodgrass finally broke the deadlock just after the hour mark, curling a free-kick beyond Mildenhall's outstretched left hand.
Three minutes later he doubled the lead as Leeds ended a run of five league games without a home win.
Snodgrass timed his run into the box to perfection to nod Sam's right-wing cross into the net - in a manner that former Leeds manager Kevin Blackwell, who was commenting on the game for BBC Radio 5 live sports extra, thought was reminiscent of Speed in his Elland Road prime.