Skip to main content
- November 22, 2005
One Of Our Best
leedsunited.com

Leeds boss Kevin Blackwell hailed his side's remarkable comeback against Southampton as one of the best of all time - anywhere.
The Whites were trailing 3-0 at half-time but inspired by 3,000 fans who kept backing them, and the introduction of David Healy in the second half, they produced a memorable fightback that culminated in Liam Miller scoring the fourth and winning goal. 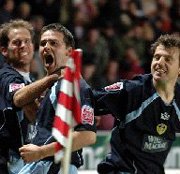 Not since United turned the tables on Derby County in November 1997 after finding themselves 3-0 at Elland Road have Leeds produced such a remarkable comeback, and Blackwell says it is the best game he's ever been involved in.
"It's up there with the top victories because at 3-0 down nobody could see us winning that game," he said.
"I remember a night with Sheffield United against Leeds United when we were 1-0 down with 2 minutes to go and we won 2-1, that was some night, but this was a lot more elongated because the comeback had to be a long longer and stronger.
"It was pure entertainment at the end but it doesn't do anytrhing for managers hearts. There was not one person left the stadium and they couldn't because it was just pure theatre."
Blackwell had a few choice words for his team at the half-time interval and they responded in the right manner.
"I sent the lads out after half time and said you've got yourself in trouble now get yourself out of it. There's not many teams that will come back from that sort of situation.
"we were not playing well and at 3-0 down you couldn't be any lower, but they have shown unbelievable team spirit.
"I didn't make any changes at half-time, I know when you work with people everyday you believe in what they can do and how they're doing it, but when you are losing 3-0 and not playing well it's a kick in the wotsits.
"I have said we will get more belief and understanding in the second half of the season and certainly today they've shown the ingredients every team needs to have around the promotion places, and that's spirit - we had that in abundance.
Blackwell reserves special praise for the Leeds fans who, although they showed their disapproval at half-time, continued to stick with the players through the game and never stopped singing for them.
It made the comeback all that bit more special.
"When you have massive support like we have it's not good enough to come in three goals down," continued Blackwell.
"I am just delighted we sent them home with something to think about, it's been a long long time since Leeds have come back from three goals down.
"I've been willing to say that I felt Leeds United was a club split all over the place and my job in the last 15 months has been to rebuild the faith amongst the players, the fans and the board.
"We are a club that is united now, the fans never turned on one of the players, they shouted us through at 3-0 down, and I would argue they gave us the platform to keep going.
"A lot of fans would have booed and jeered their team but ours are just magnificent."