Skip to main content
- December 27, 2010
Daily Mail 26/12/10
Leicester 2 Leeds 2: Foxes dig in to deny Championship high-flyers the points
By Janine Self
Simon Grayson reached for the manual of positive thinking as he tried to find an explanation for the win that got away. 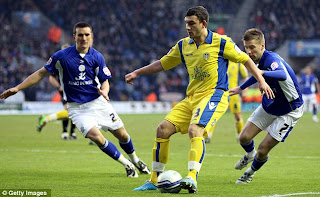 So the Leeds players performed well, showed character, were in full control and, naturally, are 'disappointed'.
Management speak. In fact, Leeds squandered a two-goal lead in five destructive minutes, swapping a win for a draw and dropping down to third in the table as well.
When boss Grayson sits down next summer to review the season, he will find Leicester filed under N for nuisance, despite the happy years he spent at the club as a player.
Leeds have failed on three occasions to better their Midlands rivals even though they might have thought this would be third time lucky when former City winger Max Gradel grabbed his seventh goal of the season.
Gradel left the Walkers Stadium last year and insisted in the build-up that the last thing on his mind was revenge. But he looked the picture of happiness after heading Neil Kilkenny's cross past Chris Kirkland in the 19th minute.
Robert Snodgrass extended the lead 10 minutes into the second half, taking advantage of hesitation by Curtis Davies, and there seemed no way back for the home side.
But Snodgrass inadvertently opened the door to a comeback when he slipped, Darius Vassell raced away and was brought down by Kasper Schmeichel, who was booked.
Paul Gallagher converted the penalty in the 71st minute. Referee Tony Bates's decision to opt for yellow instead of red caused head-scratching from both managers, perplexed by the rules of the game.
'Do the referees know the rule?' asked Grayson. 'Some referees might have given a yellow, some a red. Is it denying a goalscoring opportunity? The ref's there to make a decision. 'We made one mistake and gave them a penalty. But I am delighted with the players. We nullified the crowd and they played with quality.'
Leicester boss Sven Goran Eriksson admitted: 'Sometimes when it's a goalkeeper who makes the fault it is red, but if that had been an outfield player there would be no discussion.
For a goalkeeper the rule does not exist. 'But I don't agree with the rule. If you have a red card and a penalty you punish the player twice, so I would not complain about that.'
At least there was nothing controversial about the equaliser, a fabulous strike from Andy King, who is attracting attention from Barclays Premier League clubs.
Eriksson has a glint in his eye as he prepares for a January shopping spree, although Matty Fryatt will leave for Hull this week. Leicester are 17th but Eriksson still wants promotion.'Today we have played half the season and the facts are obvious. We have to do better if we want to talk about promotion. We do that by working hard, believing - and getting in some fresh players I hope. I am pleased with the character of the players today. It was a merry finish!'