Skip to main content
- December 14, 2009
Leedsunited.com 14/12/09
MIXED EMOTIONS AFTER BRENTFORD STALEMATE
Leeds United manager Simon Grayson was left with mixed emotions after seeing his side collect another important league point at Brentford on Saturday.
The boss was delighted to see his side leave Griffin Park with another clean sheet, following the 0-0 draw, but felt his side were the more deserving winners of what was a scrappy contest.
"We knew it would be a difficult place to go," said the United manager.
"With the conditions and the way they lined-up with one up front we knew we would have to change things to express ourselves. It was a good test.
"Their keeper made a great save from Jermaine in the first half, and maybe if that had gone in, things would have opened up a bit.
"In the first half we didn't quite get the composure we needed and sometimes we rushed it a bit. At times, we didn't quite get to the level we wanted to, but we still created the better chances.
"We were always trying to win the game - and if not, pick up a point and come away with a clean sheet. Had one of our chances gone in I think we would have won quite comfortably.
"In the end, we didn't win, but we picked up another point, and we'll draw on the positives, and get ready for Tuesday now."

Yorkshire Evening Post 14/12/09
Brentford v Leeds United: Whites happy to make point
By Phil Hay
With a public house on each of the stadium's four corners, Griffin Park is renowned for the bars which surround it.
Leeds United were more concerned with those inside the stadium on Saturday, namely the crossbars which came between their players and a victory over Brentford. By those slender margins 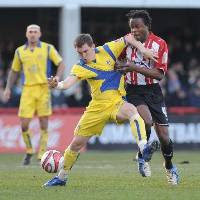