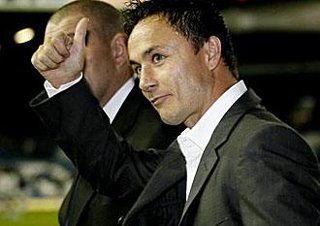 him at Swindon Town, Ady Williams, as the new Leeds manager attempts to spark a similar revival at Elland Road to the one instigated at the County Ground.
Wise and his assistant, Gus Poyet, watched their new side capitulate to Southend United in the Carling Cup on Tuesday and will be unveiled this afternoon with Leeds a point from the foot of the Championship and reeling after five successive defeats. Yet Williams, who was signed by the 39-year-old in the summer with Swindon relegated to League Two, believes he could prove an inspirational appointment, having lifted Swindon to third place in his short spell in charge.
"Swindon needed to be picked up," said Williams, a Wales defender who briefly played alongside Wise at Coventry last season before playing his part in Swindon winning their opening six league games. "This club needed a personality, a name like Dennis to pick it up by the scruff of the neck in the summer and give it a kick up the backside. Presumably, that's what he's hoping to do at Leeds as well.
"But people shouldn't get the wrong impression of Dennis. First and foremost, he's the complete opposite as a manager from what most people would perceive him to be, certainly from the figure people recognise from his playing days. I've very rarely heard him rant and rave. He's never flung any teacups in the dressing room or used the hairdryer treatment, which is what most people would assume."
There has been public scepticism in West Yorkshire as to whether Wise and Poyet, with their Chelsea connection, are the men to arrest the club's slump. Despite reaching last season's play-off final under Kevin Blackwell, Leeds have conceded 18 goals in their past five games with the reserve team manager, Dave Geddis, put in temporary charge against Southend, admitting: "Anybody who comes to this club in the situation we are in, with the confidence so low, has got a massive job on their hands. Momentum has to pick up sometime because it can't get any worse."
Wise, who appointed Andrew Beasley as goalkeeping coach yesterday, steered Millwall to the 2004 FA Cup final and Williams is confident he can reverse Leeds' fortunes. "He's inspirational," said Swindon's 35-year-old caretaker manager. "When you think of the Chelsea days and, for someone of my age, the Crazy Gang winning the FA Cup final, he has that aura about him. As does Gus, who was a first-class player as well. People sit up and take notice when they talk because they've seen it and done it many times over.
"He and Gus work well as a team. They always think before speaking, it's all very organised and very thorough - they're very professional. He's very methodical, a thinking man's manager. No stone is left unturned and he's a big organiser. That's his forte. His lifestyle, I would imagine, is very similar. On a Monday morning he's very structured about what is going to be done in the week in the build-up to a game, and he sticks with it."
Swindon's players are adjusting to life without Wise, with the striker Christian Roberts admitting his departure was "devastating", though Williams hopes to maintain the momentum generated by his predecessor as he attempts to secure the position on a permanent basis. He appointed Barry Hunter as his assistant last night and will take charge for the first time against Lincoln on Saturday.
"I've been fortunate to have played for the likes of Mark McGhee, Alan Pardew, Mark Hughes with Wales, Peter Reid, Micky Adams and Steve Coppell," he said. "You can't help but learn from these people. I'll take something from all of them, including Dennis, and hope to mould my own style. This is something I've always wanted to do and I hope to grab this chance."
Managerial career
P W D L
Millwall 89 36 24 29
Swindon Town 17 9 5 3