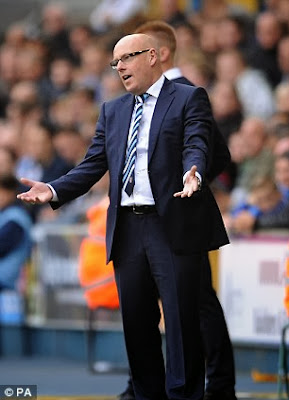 Guardian 28/9/13
Brian McDermott was left fuming at the final whistle after his side's second-half collapse handed Millwall a third straight Championship victory.
Martyn Woolford struck on 65 minutes and Scott Malone 11 minutes later to condemn Leeds to their third league loss in three games.
Asked what went wrong, McDermott said: "The second half went wrong – we didn't turn up.
"We didn't do the ugly stuff well enough in the second half so I'm very disappointed. It's the first time that's happened with me. I've been here many times and know what to expect and you've got to do it for 90 minutes, not 45.
"The second-half came as a shock to my system. I'm bitterly disappointed with the players we've got, who are decent but are not at the level at this moment in time.
"If you let runners go at your goal or get the wrong side of players, then that's what happens. We need to turn this round as quickly as we possibly can and I have faith in the players they can do it.
"If the fans see another second-half performance like we did then we're going to have a problem. We need to keep the fans with us."
Martyn Waghorn hit the post for Millwall in the first half but Leeds had good chances that were wasted by Jason Pearce and Ross McCormack.
The Millwall manager, Steve Lomas, said: "I'm delighted for the lads as their attitudes were great. They were a little disappointed at half-time but these types of nip and tuck games are what the Championship is all about.
"The two goals we scored were worthy of winning any game and another clean sheet is also a positive.
"They were two good pass-and-moves and I think they under-rate themselves sometimes – they are good players and I believe in them. But those two goals were as good a pair of pass-and-move goals as you're likely to see in the Championship this season.
"I was delighted with the collective effort as if you don't work hard, you get found out as a team. Scott's goal was great and he nearly got another one. He's a young man but you see he has got the natural attributes to be a very good player.
"I think the rivalry is great and that's what British football is all about – passionate sets of fans coming to watch a passionate game and that little bit of quality wins the game."
Posted by dave27 at 5:41 am