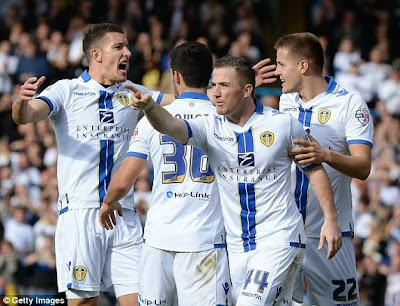 Independent 20/10/13
Home side were 3-0 up before half-time in rout at Elland Road Chris McKenna
Brian McDermott was just happy to see his side win but the dominant display by Leeds United against Birmingham City on Sunday suggested that the Yorkshire outfit can be promotion challengers this season.
“We spoke about mentality – the winning mentality,” said a delighted McDermott, the Leeds manager. “You can’t go into a game just to play the game, you have to go in to win and the reason you’re at this level is to win and you find a way, whatever it is. The more games you win, the more you learn how to win. We are learning how to win together and that is important.”
Leeds had endured their worst start to a league campaign in six years before this game but it was they who won the battle of the former top-flight heavyweights, and in emphatic fashion thanks to goals from Ross McCormack, Rodolph Austin and a two from Matt Smith that moved them up to ninth place.
McDermott’s side began smartly and McCormack had two early attempts saved by Birmingham goalkeeper Darren Randolph. But in the 18th minute Randolph went marauding out of his area in an attempt to clear, only to block the ball into Austin’s path. The midfielder slid the ball to McCormack, who adjusted himself and found the net with ease. McCormack (below) created the second for Austin with a superb cross that his captain headed home just after the half hour.
The third came on the stroke of half-time with the help of more poor Blues defending. Randolph saved again from McCormack but his defence let him down when they froze as Smith put away the rebound.
After Tom Lees denied Birmingham by heading Chris Burke’s delicate chip off the line, Leeds completed the rout with a neat bit of play between Austin and Alex Mowatt, who crossed for Smith to power his header home with 16 minutes remaining.
“I don’t do excuses, I do reality,” said the Birmingham manager, Lee Clark, as his side hover over the drop zone. “That was not acceptable for the badge that is on the front of their jersey.”
Posted by dave27 at 3:31 am