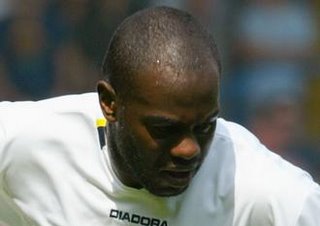 Southend land Leeds exile Ricketts
Championship newcomers Southend have completed the free-transfer signing of former England striker Michael Ricketts from Leeds.
The 27-year-old, who was capped once by Sven-Goran Eriksson against Holland in 2002, has signed a two-year deal at Roots Hall with the option for a further year.
He spent last season on loan at Cardiff and Burnley and will replace Shaun Goater in the Shrimpers attack following the Bermudan's retirement this summer.
Ricketts becomes manager Steve Tilson's second signing in a matter of hours following the capture of former Motherwell full-back Steven Hammell.
Posted by dave27 at 8:16 pm

Yorkshire Evening Post 24/6/06
Carver ponders future plans
by Phil Hay Leeds United head coach John Carver will spend the weekend considering his future after entering the frame for the manager's job at Carlisle United.
Carver is a serious contender for the vacancy at Brunton Park after Leeds granted Carlisle permission to hold talks with their highly-regarded coach, but he admitted yesterday he was "undecided" over the Cumbrians' interest. Carlisle, however, are looking for a quick appointment with their pre-season schedule due to start in eight days' time, and the position could be filled next week if the League Two champions' strategy goes to plan. Successive promotions – lifting Carlisle out of the Conference and into the third tier of English football – have transformed the club's reputation, and the opportunity to take control of a progressive side may encourage Carver to accept his first full managerial role. The 41-year-old, however, also appears to be first in line for the assistant manager's job at Leeds, and Carlisle owner Fred Story is waiting to discover whether Carver will accept his offer of talks. A large number of names have been linked with the vacancy, but Carver and Mervyn Day appear to have moved to the head of Carlisle's shortlist. Blackwell is still to confirm his plans to install a new number two at Elland Road, and Carver's departure would force him to rebuild a key section of his coaching staff after Sam Ellis left United in the wake of the Championship play-off final defeat to Watford. United's first Yorkshire derby of the new season, meanwhile, has been put back by 24 hours. Leeds will now face Sheffield Wednesday at Hillsborough on Sunday, August 27 (ko 1.15pm) after the match was selected for live television coverage by Sky Sports.

Yorkshire Evening Post 22/6/06
Leeds line up Carole
Leeds United are set to begin their summer transfer spree after lining up a deal for Brighton midfielder Sebastien Carole.
Leeds United are set to begin their summer transfer spree after lining up a deal for Brighton midfielder Sebastien Carole.The young Frenchman, pictured right, is poised to become United's first close-season signing after catching the eye of Kevin Blackwell last season.United have been in negotiations with Brighton and are still working to finalise an agreement with Carole, but the winger is expected to complete his transfer before the start of pre-season training on July 3.Albion will almost certainly hold out for a fee for Carole, who began his career at Monaco and spent time on loan with West Ham in 2004, but Leeds are in a strong bargaining position.The 23-year-old has only 12 months remaining on his contract at the Withdean Stadium, and he would be available on a free transfer next summer.Carole can operate in the centre of midfield, but Blackwell is likely to see the youngster as a solution to United's problems on the right wing.The midfielder scored against Leeds during their 3-3 draw with Brighton at Elland Road last season, and his arrival would add attacking flair to Blackwell's squad.Meanwhile, the YEP can reveal that Leeds have rejected an offer of £2million from Norwich City for Rob Hulse.United moved to repel the interest of Norwich manager Nigel Worthington yesterday after City followed up their initial approach with an official bid for the 26-year-old striker. The £2million fee would have represented a near 100 per cent increase on the money invested in Hulse by Leeds 12 months ago, but chairman Ken Bates turned down the offer following talks with Blackwell.Worthington was considering his next move today, but United's resilience could encourage City's boss to look elsewhere for a new forward. Norwich identified Hulse as the perfect partner for Robert Earnshaw, but they may be reluctant to stretch their bid beyond the £2million mark.Sheffield United manager Neil Warnock also has a close eye on Hulse as he prepares the Blades for their first season in the Premiership.Leeds are preparing for a cash windfall, however, after Danny Pugh agreed a three-year deal with Preston.The winger was technically a free agent after reaching the end of his contract at Elland Road, but United are entitled to compensation as Pugh is under the age of 24 and rejected the club's offer of a new two-year deal.Leeds and Preston were in negotiations over a fee today, and the matter will go to a Football League tribunal if the two clubs fail to reach a private agreement.Pugh has become Preston's first signing since boss Paul Simpson left Carlisle United to take charge at Deepdale last week.Reports today were linking Leeds head coach John Carver with the managerial vacancy created by Simpson's departure from Brunton Park, but Carlisle are still assessing their options and are yet to request permission to speak to the former Newcastle number two.Carver remains favourite to replace Sam Ellis as Blackwell's assistant manager at Elland Road.

Bbc.com 22/6/06
Simpson swoops for Leeds winger
Preston manager Paul Simpson is closing in on Leeds winger Danny Pugh.
Pugh, 23, has turned down a new deal to stay at Elland Road and will sign a three-year contract at Deepdale once the clubs have agreed a fee.
Simpson said: "He is a player I have always liked so I wasted no time in making my interest known. I am absolutely delighted we have got him."
Pugh came through the youth ranks at Manchester United before joining Leeds, where he made 51 appearances.
Simpson added: "He is at a great age, with plenty of football in him and he's of very good pedigree with his grounding at Manchester United." "He has a lot of quality and a great left foot and can play in either position on the left side."
Posted by dave27 at 12:30 pm 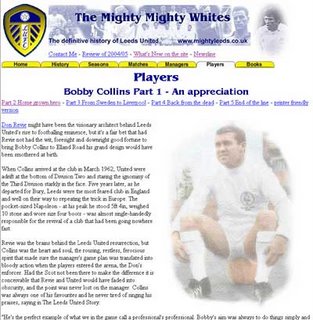 The Story of Bobby Collins

Read the story of Bobby Collins - Revie's enforcer, the heart and soul, the rousing, restless, ferocious spirit - the man who simply was THE DIFFERENCE for Leeds United

An astonishing story that you can read by visiting http://www.mightyleeds.co.uk/players/collins1.htm
Posted by dave27 at 8:38 pm