It’s back to the days of Leeds City, with the story of Herbert Chapman’s first season as manager of the club. He brought a new professionalism and big names to Elland Road. Bradford City skipper Jimmy Speirs joined and brought out the best in Billy McLeod who set a new scoring record for City 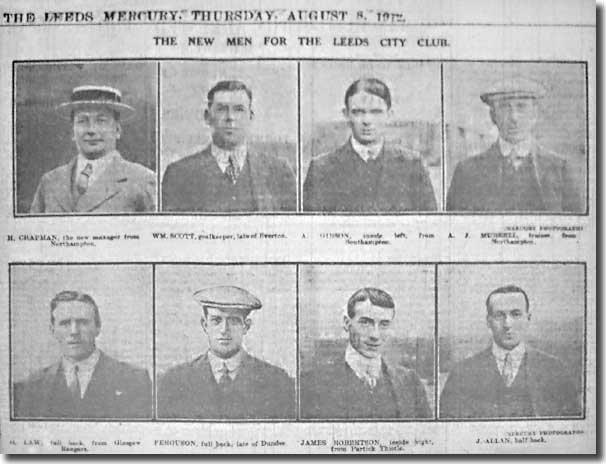 The successful candidate from a list of 90 applicants, who had to seek cheap unknowns in Ireland as City disappeared under a mountain of debts and had to seek re-election

There’s also the story of
Stan Cubberley
Leeds City's Mr Versatility, one of their great stalwarts, who brought steel to midfield

Yorkshire Evening Post 2/6/09
No bids for Beckford
By Leon Wobschall
Leeds United chairman Ken Bates has confirmed the club haven't yet received any bids for transfer-listed striker Jermaine Beckford - while insisting he isn't losing any sleep over the situation.
Beckford's future has been up in the air following his decision to turn down a new three-year deal with his current Whites' contract due to expire next summer.
Several clubs, including Middlesbrough, Coventry and Sheffield United have been linked with moves for the free-scoring 25-year-old, who plundered 34 goals for United last term.
But no-one has yet firmed up their interest, with Bates relexed about the whole situation, with the notion of being pressurised to sell the last thing in his mindset.
On the Beckford situation, he said: "We have had no inquiries yet, but that is not usual at this time because the season has just ended and most managers, scouts and coaches are away winding down.
"They come back in the middle of June and start thinking. But we are in no hurry. Jermaine is with us until June 2010 and if we don't get what we consider to be a reasonable offer, we will keep him."
Bates has added that the club are keen to sign defender Sam Sodje, who has been released by Reading, while reiterating that the ball is in the centre-back's court as to whether he wants to head north.
Sodje proved a massive hit during his loan spell with the Whites, with Bates hoping that the kudos of joining such a big club in Leeds will tip the scales in their favour when the stopper makes his decision.
And Bates went on to reveal he wouldn't be paying over-exorbitant wages for any new recruits this summer.
He said: "He (Sodje) has done well for us after he joined us in January but, again, he has to decide what he wants to do.
"But the great thing about Leeds is that we don't have to beg anyone to join us or stay with us. We are in the driving seat.
"A lot of players want to come to play for Leeds and we will choose those who want to play for the club and are prepared to accept reasonable wages, but that is down to our manager."
Posted by dave27 at 7:42 pm