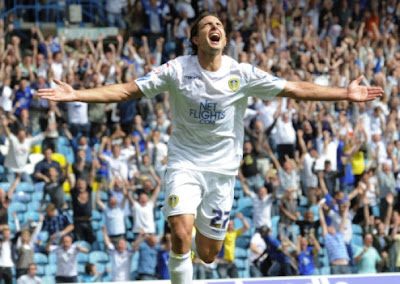 Yorkshire Evening Post 6/12/12
By Phil Hay
Davide Somma is likely to step up his comeback in a development league fixture next week after the weather denied him a competitive run-out on Tuesday afternoon.
The South African international was due to play in an Under-21 game between Leeds United and Wigan Athletic earlier this week but heavy rain in Lancashire rendered Wigan’s pitch unplayable.
United are now planning to use Somma in a match against Birmingham City at Thorp Arch next Wednesday, moving the 27-year-old a step closer towards a first-team return.
Somma has spent a season-and-a-half fighting serious knee problems and repeated operations have kept him on the sidelines since the final day of the 2010-11 season.
Leeds manager Neil Warnock, who has not been able to call on Somma at any stage of his tenure, said: “He was going to have half-an-hour in the game on Tuesday but it was called off. There’s another game planned for next week so with any luck he’ll be involved then.”
Somma’s long battle against injury first began when he damaged a cruciate knee ligament in a behind-closed-doors friendly during United’s pre-season schedule in 2011. He  was expected to complete his rehabilitation before the end of last season but a set-back forced him to undergo another operation around the time of Warnock’s appointment as manager.
The repeated injuries have halted the progress of a forward whose maiden season as a first-team regular at Elland Road produced 12 goals and earned him a debut for South Africa’s national side.
Warnock said: “He’s exactly the sort of player you want to have on the bench but everyone knows how long he’s been out for. I don’t want to put too much pressure on him too soon.”
Posted by dave27 at 6:06 pm