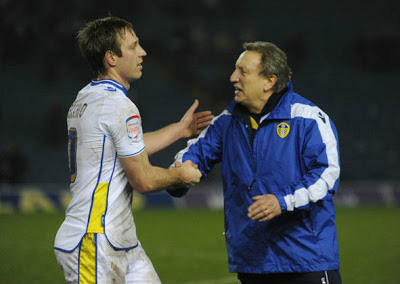 Yorkshire Post 22/12/12
LUCIANO BECCHIO ensured Leeds United’s new owners enjoyed the dream start to their tenure with a thrilling victory over Middlesbrough.
The Argentinian took his tally to 17 goals for the season with a strike either side of half-time to keep on track United’s hopes of gatecrashing the promotion race in the second half of the season.
Defeat was harsh on Boro, who played some neat football and also created a host of chances in front of a 25,406 crowd that included 3,000 in the away seats.
However, that failure to punish Leeds when on top came back to haunt the Teessiders to ensure GFH Capital’s takeover on Thursday was followed by the West Yorkshire outfit claiming a fifth win in six league games.
Becchio had cancelled out Lucas Jutkiewicz’s opener with a stunning turn and shot on the stroke of half-time.
The Argentinian had hardly been in the game up to that point but he then underlined his importance to Leeds’ promotion prospects by netting the winner, albeit with a bit of help from Jonathan Woodgate.
Pinpoint delivery from an El-Hadji Diouf corner created the opening and Becchio did the rest with a bullet header that beat Jason Steele in the visitors’ goal after taking the slightest of touches off Woodgate.
Boro, who had taken the lead on 29 minutes, had started much stronger than their hosts after the break and goalscorer Jutkiewicz showed great skill to turn Alan Tate before racing clear only to then fire into the side netting.
Leeds had another lucky escape on 54 minutes when Marvin Emnes was played in down the right and his cross was stabbed wide of his own net by Tom Lees when the ball could easily have trickled into the net.
It was a big let-off for United, who were then thankful to see Paddy Kenny turn a . Jutkiewicz shot on to the post after the home defence had again been opened up.
Kenny then saved with his shoulder to keep out an awkward shot before Seb Hines fired against a post and then Emnes shot just wide an acrobatic overhead effort from 15 yards to ensure that Leeds went into the Christmas with another vital three points.
Posted by dave27 at 5:22 pm