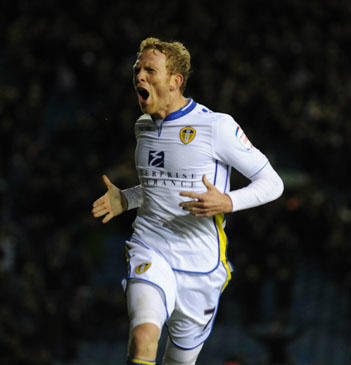 Mail 15/12/12
By Wayne Gardiner
Leeds warmed up for their midweek cup date with Chelsea by getting back to winning ways in the npower Championship and ending Ipswich's three-match victory streak.
United host the Champions League winners, with whom they have a rivalry dating back decades, in the Capital One Cup quarter-final on Wednesday, and anticipation is high around Elland Road.
The gloss would have been taken off that occasion were Neil Warnock's men to have suffered a second straight defeat today, but thanks to on-loan winger Jerome Thomas they made sure they will go into their big week on a high.
Thomas, borrowed from West Brom, missed last week's loss at Derby but has now won all four of the games he has played for the Whites and had a starring role today, scoring one and setting up another for Paul Green.
The end scoreline was perhaps harsh on Ipswich, who had lots of the ball and could have done more had they been able to pick a pass in the final third, but their lack of a cutting edge cost them dearly.
Warnock had warned his players that a poor showing today would see them on the bench come Wednesday night, and although their start was not an exhilarating one, it was better than their opponents and they never looked back.
El-Hadji Diouf, fresh from signing a new 18-month deal yesterday, had United's first chance, getting on the end of Green's chipped pass to get through on Stephen Henderson's goal but the stopper spread himself well to close things down.
Diouf had the next opportunity too, although it was only a half one, rising to try and make something out of Sam Byram's punt forward but only finding the palms of Henderson.
There was nothing Henderson could do as Leeds took a 19th-minute lead, though, with Thomas obscuring his view of Tom Lees' header from Diouf's corner and touching it past him at the last second, giving him no chance instead of what was going to be a routine save.
The sheer number of balls Leeds were putting in the box were causing all sorts of problems for Henderson and shortly after he was indebted to the scampering of team-mate Aaron Cresswell, who got back to hack David Norris' header off the line after he had failed to properly deal with Michael Tonge's cut-back.
Short of the odd burst of pace from DJ Campbell Ipswich were offering little, and as they sat back they were fortunate not to be 2-0 down just before the break as Luciano Becchio - when all he had to do was find any inch of the goal - inexplicably skied a free six-yard header from Byram's cross.
The Argentinian was indebted to goalkeeper Paddy Kenny not long after as he tipped away Carlos Edwards' cross-shot, but he had his head in his hands again just after the interval as, when he managed to direct another Byram cross on target, he drew a brilliant save from Henderson.
Ipswich had found a way to stifle Leeds by this point, however, and started to dominate possession, if without any end product, and it was cruel on them when Green doubled the home side's advantage with 21 minutes remaining.
The Leeds crowd were moaning as Alan Tate hoofed a ball clear but, as Bradley Orr failed to mop it up, Diouf released Norris, he played in Thomas and in the blink of an eye his cross had been slammed into the roof of the net by Green.
Ipswich then had two glorious chances to make a game of it, with first Lee Martin and then Michael Chopra failing to beat Kenny from six yards, and that summed up their afternoon as Leeds eased it out.
Posted by dave27 at 6:45 pm