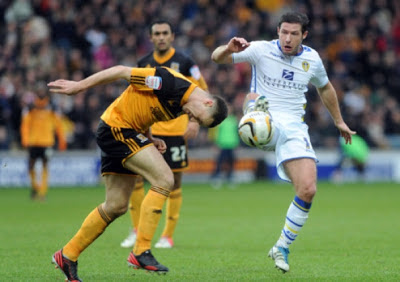 Yorkshire Evening Post 31/12/12
By Phil Hay
Neil Warnock admitted that January would be a “vital month” for Leeds United after the club reached the transfer window five points short of the play-offs.
United endured a sobering end to 2012 as a resounding defeat at Hull City left Warnock crossing his fingers in the hope of telling success in the January market.
The Leeds boss, who is under contract until the summer and aiming for a record eighth promotion as a Football League manager, said he was receiving the full support of GFH Capital and insisted the club’s new owners share his sense of urgency with the new year upon them.
United were comprehensively outplayed by Hull on Saturday, losing 2-0 to second-half goals from Corry Evans and David Meyler, and a gap of five points has opened up between Warnock’s squad and the Championship’s top six.
Warnock told the YEP: “January needs to be a good month for us. It’s a vital month and I think everyone at the club knows how vital it is.
“The new owners can’t wait to support us and they’ve said from day one that they’ll support me. I’ve just got to give them targets and hopefully do deals.
“They’re very supportive and we’re trying all the time to get players in.”
A new striker is one of Warnock’s priorities and the Leeds boss revealed over the weekend that his interest in West Bromwich Albion’s Chris Wood – recently on loan at Millwall – was likely to come to nothing after Leicester City stepped in with a £1.25million bid.
Warnock, who admitted in his national newspaper column that he “just can’t compete financially with Leicester”, said: “In fairness the owners said they were disappointed that I mentioned it but it wasn’t meant as a criticism.
“What I meant was that Leicester are like Chelsea – Chelsea in the Premier League. If they want a player then they usually go out and get him. I don’t think anyone, ourselves included, is in a position to get who Leicester are after.
“But they’re a one-off. There’s nobody else in the league like Leicester. And they can’t sign every one of our targets.”
Posted by dave27 at 10:33 am