Leeds United: Old and new are welcomed at start of fresh era EXCLUSIVE 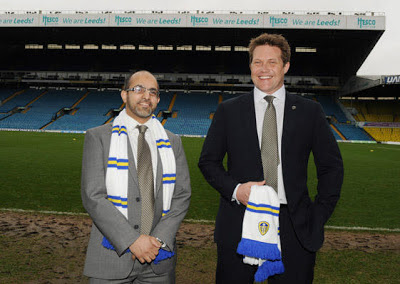 Yorkshire Post 21/12/12
By Richard Sutcliffe
THE new owners of Leeds United last night promised a “bright future” for the Championship club.
Dubai-based investment bank GFH Capital have completed their 100 per cent takeover following six months of talks with Ken Bates.
Official confirmation will follow this morning and the buyout means GFH deputy chief executive David Haigh, company director Salem Patel and board member Hisham Alrayes have joined the Elland Road board.
Under the new set-up, Bates is staying on as chairman until the end of the season when he will become club president. Chief  executive Shaun Harvey will remain in his current role.
Speaking to the Yorkshire Post last night after agreement had been reached, Haigh said: “We are delighted, but also honoured and proud to be the new owners of Leeds United Football Club.
“We have had over 4,000 e-mails of support from fans and we have been overwhelmed by the reaction.
“Everyone we have spoken to in the city has been fantastic. The atmosphere on Wednesday night (against Chelsea) was incredible, and we look forward to bringing more of the same to Elland Road.”
Patel, who like Haigh has been spotted at numerous United home games this season and was in the crowd for the Capital One Cup defeat to Chelsea, added: “We are looking forward to a bright future.
“This is a fresh start for the football club, and we welcome fans both old and new to Elland Road.”
Haigh and Patel, who have been given Football League approval, are due to appear at a press conference today, when more details about the takeover will be revealed. Included among these details is likely to be what plans the new owners have for Elland Road and the club’s Thorp Arch training ground. Both were sold by Gerald Krasner’s board late in 2004 as they battled to cope with the financial consequences of being relegated from the Premier League. Last season, United paid £1.8m to rent both facilities.
The news that a deal – purported to be around £52m – has been struck brings to an end a takeover saga at Elland Road that first began in February when news emerged of a Middle East group’s possible interest.
They fell by the wayside to be replaced by a North American consortium who toured both  Elland Road and Thorp Arch. Talks stalled, however, to leave the field clear for the Gulf-based banking institution who have now taken charge.
GFH’s purchase has not been without its problems with the deal at one stage appearing to break down after an exclusivity period, which had been granted early in the summer, ran out in August.
Both sides, though, were quick to say a deal was still on and within days GFH Capital, who are owned by Bahrain-based Gulf Finance House, had again been given preferential bidder status.
Further progress came on the morning of the Nottingham Forest home game on September 22 when Bates revealed that talks were at an “advanced stage”.
Haigh and Patel then watched United’s 2-1 win later that day with Bates, the second time the pair had been spotted in the chairman’s box after also attending the opening-day win over Wolverhampton Wanderers.
The deal took a decisive and significant step forward last month when it was confirmed that GFH had acquired a 33.3 per cent shareholding in United with a deadline of today set for the full purchase to go through.
Due diligence had already been completed into United’s accounts and operational set-up, meaning all that was left was the transfer of the money to Bates, who owned 72.85 per cent, and the other shareholders. That was duly completed yesterday, leaving GFH free to assume control.
A statement released to the Yorkshire Post said: “From a business point of view, this is an exciting investment and it is also exciting for GFH Capital and we look forward to ‘marching on together’.”
With the sale now completed, attention among supporters will turn to what approach the new owners are likely to take.
An indication may come at today’s press conference, though the January transfer window is likely to be the big gauge for supporters hoping Neil Warnock will be handed a substantial transfer kitty in an attempt to fire Leeds back into the promotion race.
Only time will tell, of course, as to how much money is available but in one of their few public statements during the long-running saga, GFH made it clear – in the wake of informing the Bahrain Stock Exchange of their interest in Leeds – that promotion to the Premier League was the firm’s stated aim.
In a statement released in late September, GFH said: “Football teams in England have received a significant revenue boost due to the renegotiation of broadcasting rights and it is expected from next season each team will receive a minimum of £60m per season due to the broadcasting rights.
“Leeds United would benefit from this if it can achieve promotion from the Football League.”
News of the sale brings to an end Bates’s near eight-year reign at Elland Road. He took over in January 2005, with Leeds losing in the region of £120,000 per week. Relegation to League One two years later was followed by administration, but since then United have become a profitable business with the last four financial years having seen a total surplus of £10m made – an impressive performance that explains why GFH and other interested parties have been so keen to get involved over the past few months.
Posted by dave27 at 2:49 pm