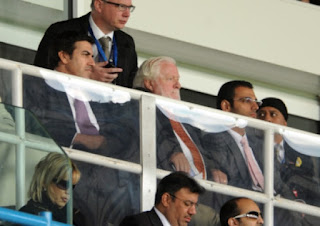 Yorkshire Evening Post 28/9/12
By Phil Hay
The Bahraini investment bank behind the proposed takeover of Leeds United has spoken for the first time about the bid, highlighting the size of United’s fanbase and the potential to tap into the wealth of the Premier League as prime attractions.v Gulf Finance House confirmed speculation about its involvement in takeover negotiations with Leeds by informing Bahrain’s stock exchange that GFH Capital Limited – a private equity company based in Dubai and owned by Gulf Finance House – had signed an “exclusive agreement to lead and arrange the acquisition of Leeds City Holdings, the parent company of LUFC.”
GFH Capital Limited have been working to secure Ken Bates’ 72.85 per cent stake in United for the past four months and yesterday’s statement was the clearest indication yet that the company expects to bring a successful conclusion to talks with the United chairman.
It was widely believed that GFH Capital were brokering a deal on behalf of a consortium of buyers but the comments from Gulf Finance House appeared to suggest that the bank itself is planning to put forward the money needed secure control at Elland Road.
Gulf Finance House did not comment on the terms of the proposed agreement – the planned buy-out is expected to cost in the region of £52million – and its statement made no mention of a likely completion date.
It did not comment either on recent claims that Bates could remain at Elland Road in an advisory role if the bid from Gulf Finance House goes through. Bates has been chairman of United for almost eight years and became the club’s majority shareholder in April of last year.
Members of senior management at GFH Capital and Gulf Finance House have attended three of United’s games this season, including Tuesday’s rousing League Cup victory over Everton, and the companies’ approach appears to have been motivated by Leeds’ large and established support and the financial earnings on offer if the club win promotion from the Championship.
United lie 12th in the table ahead of tomorrow’s clash with Bristol City, their eighth league game of the season. They have been outside the Premier League since their relegation in 2004.
The statement from Gulf Finance House (GFH) said: “GFH would like to confirm that GFH Capital Limited, a 100 per cent subsidiary of Gulf Finance House, has signed an exclusive agreement to lead and arrange the acquisition of Leeds City Holdings, the parent company of LUFC.
“According to a recent study by Deloitte, LUFC is one of the best supported clubs in English football with a higher average match-day attendance than most Premier League teams. In addition, LUFC has a large and passionate fan base and a rich history of success in English football over the last 40 years.
“Football teams in England have recently received a significant boost due to the re-negotiation of broadcasting rights and it is expected to that from next season each team in the Premier League will receive a minimum of £60m per season due to the increase in broadcasting rights. LUFC would also benefit from this if (they) can achieve promotion to the Premier League.
“Due to a confidentially provision, no further details can be given about the commercial terms of the transaction.”
United have not responded to GFH’s statement but Bates hinted strongly at their involvement last weekend when he said that Leeds were in talks with a “banking institution” with interests in the Gulf region.
The 80-year-old held a lengthy and productive meeting with officials from GFH Capital Limited – including deputy CEO David Haigh and directors Salem Patel and Hisham Alrayes – 24 hours before Saturday’s game against Nottingham Forest.
Bates said: “The potential investors are looking to conclude things as soon as possible.
“Both parties regret missing the August transfer deadline but we are planning for the January transfer window.
“We had one bit of bad luck because the chairman was coming to meet me, we were going to resolve a few things chairman-to-chairman, some things only chairmen can do.
“Unfortunately he had to pull out at the last minute for personal reasons but we’re going to try get together as soon as possible.”
Posted by dave27 at 9:30 pm