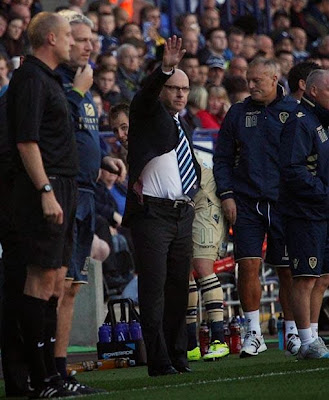 YEP 20/9/13
by Danny Mills
The downside of moving from club management into international management is the loss of day-to-day involvement with players, supporters and the game itself.
If that sounds strange, watch Brian McDermott whipping up 5,000 fans after Leeds United’s win at Bolton Wanderers.
He’d get moments like that with the Republic of Ireland but nowhere near as many. When you talk about the next international game, you’re often looking months ahead.
It’s impossible to say whether the Republic were ready to try and take McDermott on but I very much doubt that he was ready for it either.
I don’t mean that in the sense that he’s too inexperienced – although in fairness, perhaps he is – but in the sense that he’d miss everything club football gives you.
When you live and breathe the sport, you need your fix regularly. You need a following of 5,000 on a Saturday afternoon and 3,500 with you at Reading the week after. It’s all day, every day for McDermott and that’s how most of us players and managers like it.
Don’t get me wrong, there’s a massive amount of pride to be had in representing your country and its pretty obvious that McDermott wants to manage the Republic of Ireland some day but I see a lot of the England squad first-hand and I know the pitfalls of international jobs.
For instance, if you’re an extremely gifted coach – and McDermott clearly has talent – you could argue that your skill is wasted with England, the Republic of Ireland or most national sides.
Why? Because frankly there’s not a lot of coaching involved. Players join up on a Monday having played at the weekend and they need to rest as much as they need to train. Between all the travelling and the games you’ll get maybe 72 hours tops to run through your plans on the training pitch. That’s next to nothing.
As I see it, international coaches are man-managers more than anything else. Your main job is to keep the camp happy, not least because the players in your squad won’t always be familiar with each other and will, from time to time, see and hear themselves being slaughtered in the media. There must be times when the men at the top genuinely feel like it’s difficult to make an impact.
Look at what McDermott’s doing at Leeds and you can see the reward of a day-to-day job which allows you to put your stamp on a team. He’s got a side who are developing over time – hard to beat, well organised and adapting to the style of football he wants them to play.
At his age and with his experience, I’d honestly say that in my opinion the Leeds job is better than the Republic job. It’s far easier to get your teeth into and make a go of.
That’s why I’m pleased McDermott laid his cards on the table and said he was staying at Elland Road. It’s the right choice for him at this point.
As for Leeds, losing him to Ireland would have been a massive blow. I mean massive. It would have pulled the rug from beneath a side who look like they could be consistent this season and created the usual disruption.
A new man comes in and decides that some of the players aren’t for him.
He changes the style and system. Staff go, others come in. I’ve seen it before and Leeds don’t need any of that.
I go back to the crowd of 5,000 who went to Bolton on Saturday. It seems pretty clear to me that what McDermott’s doing with the team has resonated with the crowd.
New managers tend to find favour early on but he’s five months into the job now and it hasn’t been an easy period. People obviously like his approach.
It helps him and the players to have such big crowds behind them. You might question how much difference it makes because players always try to be right on it every time they’re on the pitch but there are always those moments, the last 10 minutes or whatever, when the energy flags and the legs started to feel heavy.
When that happens, the noise from the stands is what makes you clear your head and think “this is worth fighting for”; like a shot of coffee or Red Bull.
Yes, big crowds bring their own pressure. But a lot of clubs would kill for what Leeds have got.
Posted by dave27 at 10:22 am