Bolton Wanderers 0 Leeds United 1: Hunt gets a pat on the back from Mac 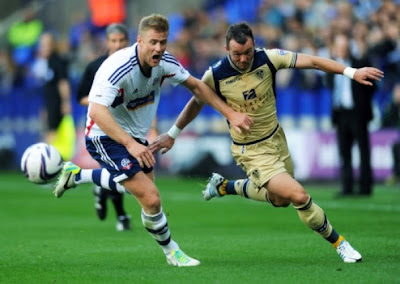 YEP 16/9/13
by Phil Hay
Brian McDermott praised Noel Hunt for facing down criticism of his recent form after the Leeds United striker showed signs of rejuvenation in a 1-0 victory over Bolton Wanderers.
Hunt reacted to a vote of confidence from McDermott by shining in Saturday’s win at the Reebok Stadium, emerging from a spell in which he openly questioned his own performances.
The Republic of Ireland international – a consistent and effective player during McDermott’s successful tenure at Reading – voiced disappointment with himself after struggling to settle into United’s team during the first month of the Championship season.
Hunt joined Leeds on a free transfer from Reading in July and has yet to score a competitive goal for the club.
But McDermott resisted the temptation to drop him at Bolton, saying the continued selection of Hunt was a “no brainer”, and the 30-year-old’s lively outing amid much scrutiny drew a nod of respect from his manager.
“Picking Noel was a 100 per cent no brainer,” McDermott said.
“People might turn round and say things about him but I spoke to him about his performance against QPR, we had a good chat and there were reasons for it – other things (outside of) football. That’s sometimes the way it is.
“Him playing was a no brainer for me because I know what he gives us. He was excellent. He worked really hard for the team and he’s fronted up to all this as well.
“He hasn’t hidden away from the fact that he knows he can do better. I’m pleased for him. He’s a great guy.”
Hunt saw only one real chance against Bolton, scuffing a shot wide from the edge of the box during a counter-attack in the first half, but he figured impressively in a spirited display in Lancashire.
Leeds were supported by a crowd of 5,000 away fans – a quarter of the entire attendance – and Luke Varney’s header after six minutes was enough to earn United their second away win of the season.
The club’s weak results away from home were severe a hindrance last season but McDermott said: “We’re trying to get a group together who are difficult to play against.
“We also trying to get a group together who can control games with the ball. That takes a little bit of time but there were points on Saturday when we did that quite well.
“We could have gone in at half-time two or three up which is good because it means we’ve created chances. We played between the lines, got ourselves in and played some really good stuff. But when we had to make headers and when Paddy (Kenny) had to make a great save at the end, we made them too.”
Asked about United’s raucous travelling support, McDermott said: “That was something else.
“If you put in the right effort, the right commitment and try to play, look at the backing you’ll get. There’s no doubt that our supporters want to back the players. I’ve always thought that about them.”
The win at Bolton set Leeds up for another challenging away fixture at Reading on Wednesday, a return for McDermott to the club who sacked him as manager in March.
The United boss could be forced to alter his defence after right-back Lee Peltier limped out of Saturday’s game with a groin strain.
Peltier, who was replaced by Tom Lees on 53 minutes, was due to be assessed by United’s medical staff this morning but could yet be included in the squad who travel south tomorrow.
Sam Byram, meanwhile, is also hoping to put himself in contention by coming through a development league game against Birmingham City this afternoon.
The 19-year-old is on the verge of a first-team return after a five-month battle with a hip problem.
Posted by dave27 at 10:56 am