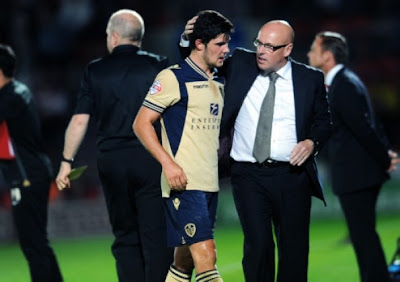 Alex Mowatt is the latest graduate of United’s academy to get the club and fans excited about his potential. Phil Hay reports.
The youth development centre in Doncaster is one of Leeds United’s strongest. It was there that Danny Rose began to turn heads and there that Leeds first engaged a five-year-old by the name of Alex Mowatt.
Mowatt’s senior debut on Tuesday night was 13 years in the making and the tip of a large iceberg. They estimate that his association with United has involved over 250 appearances in different age categories and more coaching hours than Leeds’ academy staff can quantify. This is club recruitment in the modern age- a process which begins almost as soon as boys learn to walk.
Mowatt’s story is typical of so many of the teenagers around him at Thorp Arch. He was playing with Bentley Pumas, a junior club in Doncaster, when Leeds took him on. United run numerous development centres and coach a shadow squad on Friday evenings, the last stop before their academy. Players in the shadow squad turn out for their local teams over the weekend but are all on the verge of six-week trial during which time Leeds decide whether to bring them in-house.
The club signed Mowatt at the age of nine during the 2003-04 season. The date says much about the patience of academy systems and creates a certain irony – that Leeds should create a prospect for 2013 and beyond in a season when they and their senior squad were in untold trouble. Quietly and off the radar, the youth-team ranks at Thorp Arch worked on.
Mowatt’s debut for Leeds – a wonderfully proficient performance in their League Cup win over Doncaster Rovers – was seen as an inevitability by the time it came; “nailed-on” as one coach put it.
At the beginning of last season United’s development-squad manager, Neil Redfearn, and Under-18s boss Richard Naylor named Mowatt as captain for that age group. The aim was to bring a youngster described as driven, stubborn and fairly quiet out of himself; to instil in Mowatt more maturity and authority.
Leeds’ Under-18s won their league at a canter with him in the thick of the team until an ankle injury claimed him towards the end of the term. He was the stand-out player in an FA Youth Cup tie at Liverpool in February and regularly appeared in Redfearn’s Under-21 line-up. It was with the Under-21s that Mowatt sold himself to first-team manager Brian McDermott last month, pulling the strings from the centre of midfield in a friendly against Shelbourne. McDermott arrived back at Thorp Arch with much to say about the 18-year-old’s talent.
For a while there had been some doubt about when Mowatt’s injured ankle would allow him to play again. He underwent repeated scans while Leeds worked out the root cause of the pain but was cut loose on the training ground in time to negate the effect of many inactive weeks. Having signed a two-year professional contact in March, it was not in his interests to lose most of his summer as his contemporary, Chris Dawson, did.
Emerging footballers have a habit of changing positions over time and finding new niches as their body shapes change. Mowatt has always been a midfielder and was one of several first-team scholars who benefitted from the perceived ignominy of playing below his age group. It is a strategy used regularly by Leeds, allowing raw Under-18s to play more freely at Under-16 level. Byram was told to take that step; so too Fabian Delph and Jonathan Howson. The list is so long and distinguished that United no longer need to explain their rationale.
Mowatt is known among the senior players as wonder-boy and has the nickname ‘MC’ among his peers (he was, according to those who know about these things, a dab hand in rap competitions). As part of United’s scholarship he recently earned a BTEC in sports science, the equivalent of two A-Levels. Academies in the main are aware of the need to provide exit-routes for those who fall short in professional football and require alternative employment. Mowatt might not have that problem.
There is, already, an element of superstition about him. For several years his mother and father were unofficially banned from watching him. It was the midfielder’s view that his performances suffered with his parents looking on. Employees at Thorp Arch do their best to keep them in the loop and provide tickets on the quiet.
They were in Doncaster, Mowatt’s home town, on Tuesday to see his nerveless display of passing and moving and the deep cross which created Leeds’ first goal. Appraisals of him afterwards ranged from “immense” to “amazing”. The significance of his debut was that it asked more of him than a 10-minute runaround; starting against a Championship club forced Mowatt to sink or swim.
The months ahead will be an education in more ways than one. Prior to their second-round tie at the Keepmoat Stadium, United’s squad met at a hotel in South Yorkshire for their pre-match instructions. Unfamiliar with the routine, Mowatt travelled instead from Doncaster to Thorp Arch, only to realise that the rendezvous point had been on his doorstep. But the senior circle has welcomed him with open arms. The players around Mowatt on Tuesday night sent him home with pats on the back and a signed shirt.
The interest in his appearance was such that members of Leeds’ development squad paid for tickets at the Keepmoat. Simon Lenighan, Luke Parkin and others made sure they were there. Goalkeeper Alex Cairns – another Doncaster native – sat on his hands in the home end while Leeds fought through to a third-round game at Newcastle United. That is the beauty of a debut like Mowatt’s – the envy and ambition it provokes on the fields of Thorp Arch. You have not seen the last of him, or the half of him.
Posted by dave27 at 11:15 am