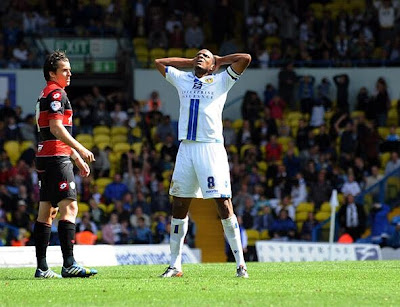 by Leon Wobschall
A GOAL fifteen minutes from time from former Leeds United target Clint Hill ended the Whites’ six-match unbeaten run this term as Rangers moved top of the Championship in a largely dour encounter.
Hill - on the wanted list of ex-manager Neil Warnock - struck from a few yards out, firing home after the United defence failed to deal with a dangerous free-kick from Joey Barton, with ex-Hoops keeper Paddy Kenny’s parry then falling invitingly to the veteran defender.
One goal was always likely to settle the clash between two of the division’s early risers this season, with Leeds going into the lunch-time clash mindful that victory would see them move to top spot in the second-tier for the first time since May 1990 and record their best start to a league season in 29 years.
But it was Rangers’ day, with Harry Redknapp’s side following up their recent win at Bolton with victory by the same margin - although they were handed a big scare in the fifth minute of stoppage-time.
That arrived from an unlikely source, with a 30-yarder from Rudy Austin clipping the outside of the crossbar, with Robert Green rooted to the spot.
Aside from that, few genuine moments of quality arrived over ninety minutes as both sides largely cancelled out each other in a tepid encounter watched by 23,341 - and thousands of others who viewed the game on Sky Sports.
The major talking point arrived after just eight minutes when Rangers were denied an opening half by the flag of linesman Paul Hobday after Joey Barton slotted the ball past Kenny, with replays showing that the midfielder was onside.
Barton latched onto Gary O’Neil’s pass, with Scott Wootton and Lee Peltier playing him onside and tucked the ball home in front of the Kop, but referee Stuart Attwell, after consulting with his linesman, ruled out the effort.
United produced an inhibited first-half showing lacking in tempo and failed to muster an effort on goal in the opening 45 minutes.
But things did improve - if not by a substantial margin - in the second period, more especially with substitutes Dom Poleon and Matt Smith entered the fray for Noel Hunt and Luke Varney in the 57th minute.
Straight after going on, giant striker Smith was inches away from getting on the end of Luke Murphy’s corner while soon after Poleon benefitted from an error from Nedum Onuoha, with his low shot saved by Robert Green.
Hill then made the breakthrough and try as they might, United couldn’t stir themselves back in the life and provided only one or two fleeting moments of threat.
Sub Alejandro Faurlin almost wrapped things up in the final ten minutes, with his close-range effort flying wide, while at the other end, Poleon shot at Green before Jason Pearce’s header flashed wide from sub El Hadji Diouf’s cross.
In stoppage time, proceedings came belatedly to life with Peltier’s goalbound cross-shot deflected wide by Junior Hoilett.
The Stoke City target then threatened at the other end straightaway with a rasping shot before Austin almost ensured a share of the spoils at the death for the hosts.
Leeds manager Brian McDermott saw his side beaten for the first time this season and said: “Did we do enough to win? Probably not. Did we deserve to lose? Probably not.
“We got done at a set-play which is disappointing to say the least and we didn’t do enough with the ball. Without possession we were diligent and solid.
“I thought we should have had a penalty early in the second half but their disallowed goal should have been given. These things happen. No-one could fault the players’ effort.
“They kept going and showed real desire against a team that has cost a lot of money and the crowd didn’t get on our backs.”
Posted by dave27 at 11:42 am