Reffing Hell for Warnock as Leeds tumble to League leaders 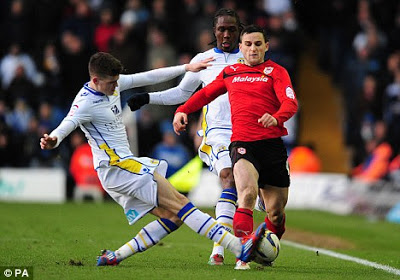 To Ell And Back 3/2/13
Neil Warnock criticised referee Mike Dean for missing two late penalties as Leeds were toppled by the runaway league leaders in a tight game at Elland Road.
According to Warnock. Dean who he otherwise acknowledged had a good game missed two penalties, a handball from Mark Hudson in the nintieth minute and another handball in the 93rd minute.
Leeds can take many positives how they set their stall out against the league leaders, who went 10 points clear thanks to their good fortune in West Yorkshire tonight. They seem bound for the Premiership and I'm sure their sell-your-soul red kit and persistently niggly style will grace the top flight of English football.
Warnock dropped Paul Green to the bench following the win over Spurs, Ross Barkley returning after his parent club Everton denied him permission to play in the FA Cup. New signings Habib Habibou and Stephen Warnock made the bench but major buy Steve Morison who moved in exchange for Luciano Becchio and a reported £200,000 in United's favour was not risked due to a thigh strain.
In an evenly fought contest, the first clear cut chance of any note came on the half hour mark when Barkley tried to place a chance in the six yard box but ended up shooting straight at David Marshall who cleared the danger with his legs.
Bellamy did have the ball in the net on 43 minutes but it was disallowed for offside.
Leeds started the second half brightly and Brown fizzled a shot over. However I felt around the hour mark we began to lose our shape a bit and it was a rare mistake from the normally impeccable Sam Byram that settled the game on 64 minutes. Byram inadvertently hooked a clearance into the path of the reviled Craig Bellamy and his sliced shot fell invitingly into the path of Fraizer Campbell, who had barely been on the pitch 120 seconds for him to squirm the ball past Kenny.
The presence of Campbell underlined the gulf in resources between the Welshmen and Leeds, a player who has commanded millions of pounds in transfer fees on their bench and our striking hopes pinned on Habib Habibou, a player none of us have ever seen before, arrived from an unheard of Belgium club on loan and probably more famous for manhandling a stray duck on YouTube than his goalscoring exploits.
Warnock made his solitary change bringing on the Central African Republic striker for El Hadji Diouf and other than win a solitary header, it was a barren afternoon for the man who's name will cause more difficulty in pronouncing than to opposition defenders on this short showing.
Admittedly it is easy to get downbeat but Cardiff are a bogey side if there ever has been one, Leeds last beating the Bluebirds in 1984. Only four of today's starting Leeds line up were even born when the much maligned George McCluskey netted the winner.
Warnock was right to praise the central defensive duo of Lees and Peltier as outstanding as they were. Luke Varney deserves credit for winning more than his fair share of headers in the absence of a certain Argentine striker, however I was puzzled not to see Davide Somma on the bench and more perplexed that Warnock did not male a change in central midfield, particularly given that Rodolph Austin had his poorest game I've seen him in a Leeds shirt to date.
Bizarrely we remain just six points off the play-offs and we head to Wolves who are just two points from the drop-zone. If we play like we did today then I can see us getting a very rare win at Molyneux next Saturday.
Posted by dave27 at 10:24 am