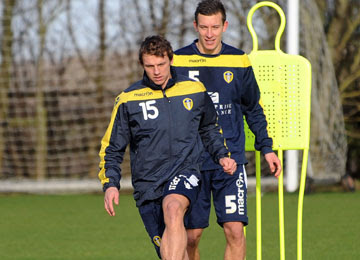 Yorkshire Evening Post 5/2/13
IT has taken Neil Warnock six years to finally get his man and the Leeds United manager is hoping that patience pays dividends.
Namesake Stephen was on his radar when the United chief was in charge at Bramall Lane.
Instead of joining Sheffield United in what proved a one-season stay in the Premier League, Warnock made a £1.5m switch from Liverpool to Blackburn Rovers in January, 2007.
After 88 games for Rovers, the left-back signed a four-year contract with Aston Villa in 2009, subsequently fell out of favour under Gérard Houllier but was given a vote of confidence when Alex McLeish took charge and made 34 appearances for the Villains during the 2011–12 campaign, missing only three Premier League fixtures.
Warnock, 31, was then frozen out by new manager Paul Lambert and went out on loan to Bolton Wanderers last September, making 15 appearances.
However, the twice-capped England international was snapped up by his namesake on transfer deadline day, signing a two-and-a-half-year contract at Leeds after West Ham had also shown interest.
That contract, combined with the manager’s persuasive powers, convinced Warnock that Elland Road was the only place to be.
“Neil Warnock is one of the reasons I came to the club. He was great to talk to on the phone when he wanted me to come and after coming into the training ground and chatting to him, he made me feel so wanted,” said Warnock, who, in his second game for Bolton, gave away a penalty in the 2-2 draw with Leeds.
“I’ve noticed with all the lads how highly they speak of him and the relationship he has with all the players – it’s great.”
Of Warnock’s previous attempt to sign him, the player explained: “I was close to joining him at Sheffield United. “I spoke to him when I was leaving Liverpool but I decided to go to Blackburn. He obviously likes what I’m about and that’s one of the reasons I came as well – because of his opinion of me. You hope that he trusts you and, hopefully, knows what you can do.” The defender was diplomatic about his relationship with Villa chief Lambert. “I just want to play football. People say ‘get your career back on track’ but it’s not really been off track. It’s a manager’s opinion. I couldn’t do anything about that at Villa, it’s just the way it was. I played the year before in near enough all the games so, for me, it’s just about coming here to enjoy my football.
“You’ve got to accept that you’re not in the manager’s plans and look to move on. I went to Bolton on loan and I knew that my time at Villa was coming to an end. I went out and tried to play some football and prove to people that I can still play. I hope to do that here.”
This is not Warnock’s first Yorkshire club, having made 12 appearances on loan from Anfield for Bradford City in his early career.
“It seems like a long time since I was with Bradford but I have come back to Yorkshire and, hopefully, things will be good here. I still look out for their results and I still speak to a couple of the lads. It’s great to see that they have got to Wembley but it’s a shame where they are in the league but, hopefully, they can pick up and come back up now.
“I signed as a midfielder at Bradford and that was the position I played. The manager here sees me as a left-back and has brought me in as a left-back but if he decides to change his mind and play me in midfield then I am happy to do.”
Posted by dave27 at 6:59 pm