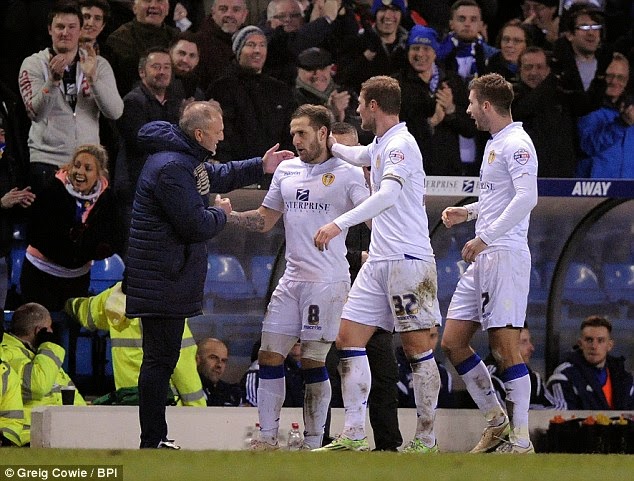 Mail 4/3/15
By RICHARD GIBSON
Daryl Murphy squandered the opportunity to send Ipswich back into the Championship play-off places with a late penalty miss at Elland Road.
Second-half substitute Murphy was foiled from 12 yards by Marco Silvestri, who atoned for an earlier blunder with a splendid save following Sol Bamba’s handball.
Defeat, confirmed by Billy Sharp’s stunning volley seconds after Marco Silvestri’s goalkeeping howler had gifted Ipswich substitute Freddie Sears an equalizer that would have took them up to sixth, was their sixth defeat in 11 matches this calendar year.
Alex Mowatt’s stunning free-kick had put the Yorkshire club ahead in the 70th minute.
But Silvestri fumbled a drive from Sears – who had only just arrived on the pitch – into his own net to concede the advantage.
Yet in a dramatic six-minute spell, Leeds re-took the lead when the precocious Lewis Cook floated a cross towards the penalty spot, where Sharp swiveled to dispatch the ball beyond Bartosz Bialkowski.
Ipswich surprisingly rested Daryl Murphy, the division’s 21-goal top scorer, and handed full debuts to loanees Chris Wood and Luke Varney up front.
They began positively with their new-look attack. Within 60 seconds, the visitors attempted to utilize Wood’s pace beyond the Leeds defence and the New Zealand international laid off to Varney, whose shot was charged down. While there were not three minutes on the clock when an unmarked Varney – who only quit Leeds last summer – headed in Paul Anderson’s right-wing cross only for his effort to be ruled out for offside.
But they did not test Silvestri until a dramatic second period.
In contrast, Leeds created some decent chances with the livewire Sharp denied twice – a goal-bound seventh-minute volley blocked by Ipswich defender Tommy Smith and a near-post header that flew over the top after Sam Byram stole possession just after the half-hour.
It was a different story upon the resumption, however, as the visitors pressed with more vigour, and it took a fine Silvestri reaction to divert left-back Tyrone Mings’ downward header around the post.
Within 20 minutes, McCarthy thrust Murphy into the action to provide a more direct edge to his team – only for him to spurn the one opportunity to add to his campaign tally when referee Mark Brown spotted Bamba’s indiscretion.
His effort was powerful and well placed but the Italian goalkeeper flung himself low to his right to block.
However, it was the impish creativity of the hosts rather than that stop that left the lasting impression in terms of quality.
One of the hallmarks of the Leeds side Neil Redfearn is shaping at the end of a season of upheaval including four managerial changes is a dynamic, young midfield.
And when Mings felled Sam Byram on Leeds right, Mowatt stepped up to wrap his left boot around the ball and deposit it inside the near post.
Then 18-year-old Cook, whose performances are already being monitored by Liverpool and Arsenal, picked out Sharp to put United within striking distance of assuring second-tier survival.
Posted by dave27 at 6:33 am