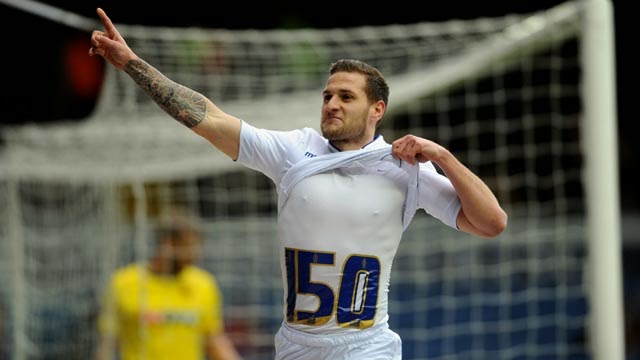 leedsunited.com 2/3/15
Billy Sharp netted his 150th career goal on Saturday by opening the scoring against Watford at Elland Road.
The striker returned to the side in place of the injured Steve Morison and got United off to a flying start, slotting home from close-range in front of the South Stand after just six minutes.
Sharp celebrated his fourth goal in United colours by revealing a t-shirt emblazoned with ‘150’ underneath his match shirt.
The 29-year-old scored his first career goal just over 10 years ago, netting in League Two while on loan at Rushden and Diamonds in February 2005’s 3-1 defeat at Chester.
His previous three United goals all proved to be crucial – clinching three points against Middlesbrough and Huddersfield, as well as securing a point away to Nottingham Forest – meaning Saturday was his first time on the losing side after getting on the scoresheet.
Posted by dave27 at 6:34 pm