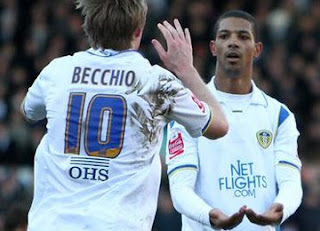 McSheffrey and Shane Lowry both making their debuts as United looked to end a run of three league games without a win.
Lowry came in at left-back in place of an ill Andrew Hughes while McSheffrey started on the left in place of Bradley Johnson, who dropped to the bench. Grayson was also without injured duo Paddy Kisnorbo and Neil Kilkenny.
Having suffered a 3-0 defeat at Swindon in midweek, United were looking to get back on track and in a tentative opening period Jermaine Beckfordalmost found an opening towards goal.
Colchester also started with plenty of confidence and the visitors were shouting for a penalty when Philip Ifil took a tumble under pressure fromLubo Michalik after a Marc Tierney cross.
On 21 minutes, McSheffrey had a hand in the first real opening of the afternoon when Micky Doyle tested Ben Williams with a low, skidding shot. McSheffrey and Beckford was also both denied by offside flags when well-placed to try their luck.
Casper Ankergren made his first save of the afternoon when he got down well to an Ifil free-kick while at the other Robert Snodgrass was crowded out in the box and Michalik headed into the arms of Williams.
Colchester were defending with a rigid line and when Luciano Becchio breached that rearguard he won a penalty after being brought down. It was the boost Leeds needed and, just as he had at Tottenham last weekend, Beckford stepped up to convert from the spot to put Leeds ahead.
That advantage was almost doubled three minutes later when Lowry started a break that saw Beckford feed McSheffrey, who made a great run, but his finish was just wide.
United had looked solid during the opening period, and Grayson's men started the second period in similar fashion. Leeds also had the first opportunity when McSheffrey broke and fed Beckford whose shot was deflected wide. McSheffrey also went close from the corner when his powerful strike from the edge of the box was deflected over the top by Beckford.
The second goal did come in the 55th minute, though. Jonny Howson showed great skill to bring the ball down and shoot from just inside the box and as the ball came back off the upright Beckford was at his poaching best to bundle the ball home from close range.
The striker thought he had bagged a hat-trick shortly after the hour, but his goal was ruled out by another offside flag.
United were forced into making a change on 71 minutes when Lowry limped out of the action due to what appeared to be crowd, following an impressive debut, but Johnson came on as his replacement.
And with eight minutes remaining, Grayson's other impressive debutant McSheffrey was replaced by Max Gradel. And the club's other new signing came within a whisker of making it 3-0 when he had a shot saved after good work by Beckford. From the resultant corner, Leigh Bromby sent a header glancing header against the bar.
There was little else in the way of drama as United went on to record a first league victory of 2010 thanks to a professional, solid performance.
Posted by dave27 at 6:49 pm