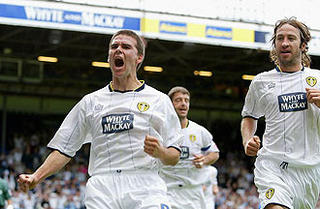 mers met at Elland Road and predictably, it was Leeds who came out on top as they beat troubled Millwall 2-1 at Elland Road.
Whilst Ken Bates has dug deep to assemble a side that looks capable of delivering a play-off berth, Millwall have dispensed with two managers and several of their top players since the close of last season.
In a game that will not live long in the memory, Leeds woke the home crowd on 27 minutes when David Healy swiveled to expose lacklustre Millwall defending but his effort was cancelled out in the second half as debutant Don Hutchison found a leveller on the hour mark.
The first period was a largely sterile affair as both sides squandered possession all too readily - although on occasions Leeds did show sporadic moments of quality.
American wide man Eddie Lewis could have marked his Leeds bow with a goal but screwed his shot wide before Healy's stooped header arched over the top of Andy Marshall's goal.
Barry Hayles looked full of running on the counter for Millwall but in Healy, Leeds have one of the division's top predators and after a corner kick was failed to be dealt with, the diminutive Irishman turned in the six-yard box to lash the ball past Marshall.
A fit again Eirik Bakke saw a near-post shot saved after a powerful run into Millwall's box before Hutchison marked his first appearance with a goal.
Alan Dunne dispossessed Leeds' Dan Harding on the byline and from the full back's cut back, Hutchison delivered a stunning strike from 12 yards past Neil Sullivan high into his near post.
Leeds' response was to up the tempo and whilst they had control for large spells, chances were at a premium and they were mightily relieved when on 73 minutes Bakke was upended in the box to hand Healy a chance to grab his second from the penalty spot. The diminutive livewire dispatched with aplomb from 12 yards and with substitute Michael Ricketts proving a powerful nuisance, Millwall never really looked like getting back into the first game of what could be a long season.
Posted by dave27 at 5:24 pm